The First Amendment has two provisions concerning religion: the Establishment Clause and the Free Exercise Clause. The Establishment clause prohibits the government from “establishing” a religion. The precise definition of “establishment” is unclear. Historically, it meant prohibiting state-sponsored churches, such as the Church of England.

The test to determine whether a law has the effect of establishing religion originated in Lemon v. Kurtzman, and is known today as the Lemon test. The test has three parts:

(1) the primary purpose of the assistance is secular,

(2) the assistance must neither promote nor inhibit religion, and

(3) there is no excessive entanglement between church and state.

Free Exercise Clause: protects citizens’ right to practice their religion as they please, so long as the practice does not run afoul of a “public morals” or a “compelling” governmental interest. For instance, in Prince v. Massachusetts, the Supreme Court held that a state could force the inoculation of children whose parents would not allow such action for religious reasons. The Court held that the state had an overriding interest in protecting public health and safety.

Sometimes the Establishment Clause and the Free Exercise Clause come into conflict. The federal courts help to resolve such conflicts, with the Supreme Court being the ultimate arbiter. The Supreme Court was exactly that (the ultimate decision forum) in Conestoga Wood Specialties v. Sebelius, where Proctor & Lindsay’s very own Chuck Proctor was lead counsel through the Third Circuit.

The Religious Freedom Restoration Act of 1993 (RFRA) 42 U.S.C. 2000bb et seq., provides that the government “shall not substantially burden a person’s exercise of religion” unless that burden is the least restrictive means to further a compelling governmental interest. Like explained earlier, the question was whether religious owners of a family business, or their closely-held business corporation, have free exercise rights that are violated by the application of the contraceptive-coverage Mandate of the Patient Protection and Affordable Care Act of 2010 (“ACA”).

The chart below helps analyze the balancing tests the government factors in to such significant freedom of religion-type issues: 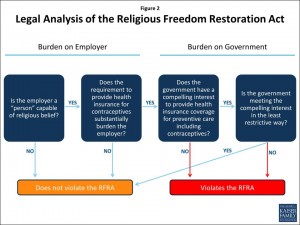