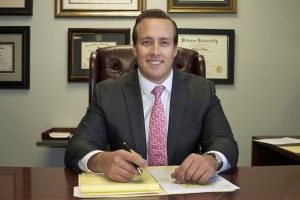 Prior to joining the firm, Mr. Anderson was dedicated to representing clients in real estate transactions, landlord/tenant, and municipal law at a firm in the Trenton area.

Mr. Anderson graduated from The College of New Jersey in 2009.  A Division III athlete, he played on the varsity men’s football team throughout his college career.  Following graduation, Mr. Anderson attended Widener University School of Law, and received his Juris Doctorate in May 2012.

During law school, Mr. Anderson participated in several internships, including the New Jersey State Office of the Public Defender and the Superior Court of New Jersey Chancery Division.

Mr. Anderson is currently admitted to practice law in Pennsylvania, New Jersey, the U. S. District Court, Eastern District of Pennsylvania, Third Circuit Court of Appeals, and is a member of the Delaware County Bar Association.