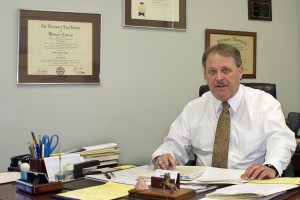 Mr. Lindsay graduated from Villanova University in 1974, and thereafter attended Delaware Law School of Widener University (now known as Widener School of Law), where he received his Juris Doctorate in 1978.  Upon graduation, Mr. Lindsay accepted a job in the Delaware County Public Defender’s Office, where he became involved in the Major Case division and then subsequently was promoted to Assistant Director of the Juvenile Division.

After many years of working for the Delaware County Public Defender, Mr. Lindsay went to the private sector, where he became a litigator for a law firm in Delaware County handling civil and criminal cases.  Mr. Lindsay joined the firm in 2008 to create the firm presently known as Proctor Lindsay & Anderson.